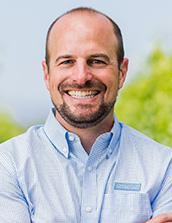 A Napa Valley native whose father is also a winemaker, Nate grew up with wine on the table and a drawer full of t‐shirts emblazoned with winery logos. His first job after graduating with honors from UC Santa Barbara with a BS in Biopsychology was as a “cellar rat” at Groth Vineyards & Winery. “I loved that first harvest, so I packed my bags, dropped my application for UC Davis in the mail and went off to Hawke’s Bay, New Zealand to work another.”

After earning an MS in Viticulture and Enology from UCD, he was hired as cellar master at Etude, and then spent two years as assistant winemaker for Patz & Hall Wine Company. In 2008 Nate was hired by Marchese Piero Antinori to be winemaker for Antica Napa Valley. He earned an Executive MBA in Wine Business from Sonoma State University in 2014.

Nate joined Silver Oak & Twomey as Silver Oak Winemaker in 2014, was promoted to Director of Winemaking in 2017, and then Vice President of Winegrowing in 2019. His responsibilities center around leading the team that handles all aspects of farming, grower relations, and winemaking for Silver Oak & Twomey.

Back
This item appears in:

The Unified Wine & Grape Symposium (UW&GS) encourages you to exercise caution for any solicitations for discounted hotel rates or directory listings which often include advertising solicitations. There are many show directories that target attendees, sponsors and exhibitors from other shows including ours. These solicitations are often mailed and appear to be from the Unified Symposium, CAWG or ASEV and they are not.